I have been up to my eyeballs in appointments for all 3 girls, they come in waves and we recently just got slammed with a huge wave of appointments.

I realized I haven't updated much about Sofia's medical appointments and general health...and doing so will help me keep it all straight :)

When Sofia came home she was sick, we had a sick child visit with her pediatrician and got baseline stats and some referrals going. Sometimes I feel like I'm trying to get from point A to point B but I keep getting sidetracked along the way with new specialists and new referrals. My favorite is when one doctor refers us to a certain specialist who refers us to another (sarcasm noted).

After this appointment we scheduled a cardiology appointment for an EKG and ECHO. We were not concerned of any major heart issues, but several doctors did hear a murmur and kids with Down Syndrome should ALWAYS have an echocardiogram to check for Congenital Heart Defects since they're so prevalent.

While waiting for that appointment we took her to the international adoption clinic which is a fabulous starting point! They ordered a ton of blood work checking for vaccine titers, bloodborne viruses such as HIV, Hepatitis B and C, etc., lead levels, calcium, levels, and a hundred other things. Her diagnoses included malnutrition, lead exposure, parasite exposure, bloodborne virus exposure, growth delay, and of course Down Syndrome. The same day we saw the Down Syndrome Clinic doctor. They were excited with how well she was doing and ordered bloodwork for thyroid, complete blood count (to rule out leukemia which is also more prevalent in children with Down Syndrome), and Celiac Disease screen (also more prevalent in children with DS). They also ordered stool samples (oh so fun) to check for parasites (which is typical with kids who have been internationally adopted).

The bloodwork all came back as expected except for one of the items in the Celiac screen. We noticed some stomach issues in Ukraine and just like our other girls, we decided to take her gluten free and noticed a huge improvement in symptoms. Even after being gluten free for 3 weeks one of her markers for Celiac's came back high. They were going to send us to a GI specialist to have a biopsy done to confirm Celiac's but that would mean putting her back on a gluten diet and I just didn't feel right doing that since she is finally starting to feel better! So, since she is gluten free anyways, it's not important to us to have Celiac Disease confirmed at this point. We'll continue to screen in the future and if we ever decide to try a gluten challenge with her then at that point maybe we'd elect to have the biopsy done, but it's not a priority right now, and nothing would change with the results being positive. So for now she will stay gluten free, we know AT LEAST that she has a gluten intolerance, whether or not it actually is Celiac Disease.

The other follow up suggested from those appointments were a dental visit and she appears to have discolored teeth and possibly some bottle rot (dentist check scheduled in April with the other two girls). We were told to schedule a vision screen and hearing screen as well (vision was scheduled since before she came home because it's hard to get in).

Back to cardiology, she does NOT have a congenital heart defect!! She does have a PFO which is not a big deal. She also has a small "non-issue" with her mitral valve and they'll just keep following that. He did measure some borderline pulmonary hypertension, so suggested that we schedule with an airway specialist to see if any airway issues could be causing the possible PH. He wasn't confident with the number he got, so it may be a non issue as well. Regardless, we have to follow up. We scheduled the airway appointment for April.

At her 3rd pediatrician appointment (to have TB test placed and well child visit), the doctor suggested also scheduling with Pulmonology to look into the possible pulmonary hypertension, so that is in the works as well. We're trying to coordinate this appointment with her airways appointment and some of Mila's appointments at Children's Hospital since it's a 2.5 hour drive for us. The pediatrician also suggested having an evaluation done here for sure steps (ankle braces) like Zoya has. I'm afraid to get these for her because then she'll start walking ;) She's already so much trouble! HAHA!

She had her vision check today and got a great report! She has some blocked tear ducts but I'm hopeful those will resolve on their own with time as they're already improving. Should they not resolve we'll schedule a procedure to have them unblocked. Other than that she doesn't have to go back to the eye doctor for 18 months! Yay!!

She will see ENT within the next month and have a hearing screening done.

Okay, I think that covers everything, for Sofia anyways. I'm tired just typing it all! Overall she is healthy and the appointments should decrease once we get all of the initial appointments out of the way (as long as they stop referring us to new specialists! haha). 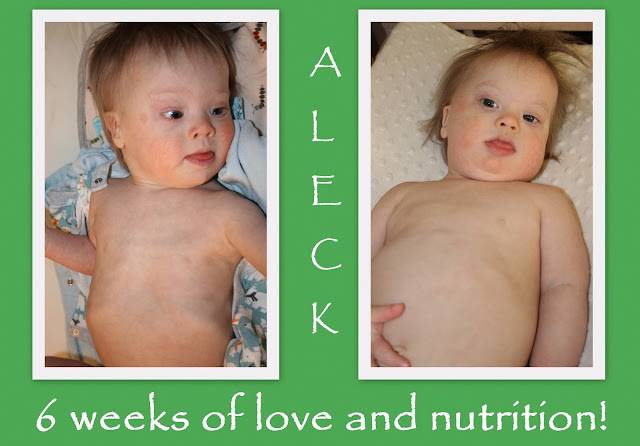 Here is the post many of you have been waiting for! Drink recipes to replace pediasure!

Deanna starts us off here with some great information and the recipe she uses for Aleck:

Ok, so the first thing I want to make sure we highlight is that these recipes are NOT for infants.  This is NOT formula!  These recipes can be used a high nutrition/high fat/high calorie drinks for children who are undernourished or would otherwise be drinking something like pediasure, but in NO WAY is this intended for children under a year old.  It’s not a replacement for breastmilk or formula, so please don’t use it for babies (with one ingredient exception that Sarah’s going to talk about!) :)Phew.  ‘Nuff said.
The second thing I wanted to encourage you to do is learn about your ingredients.  Don’t take our word for it!  This recipe is one that I play with and change often for Aleck, and you will have the best success if you experiment with what works best for you.  So change it!  Adjust it!  The confidence t… 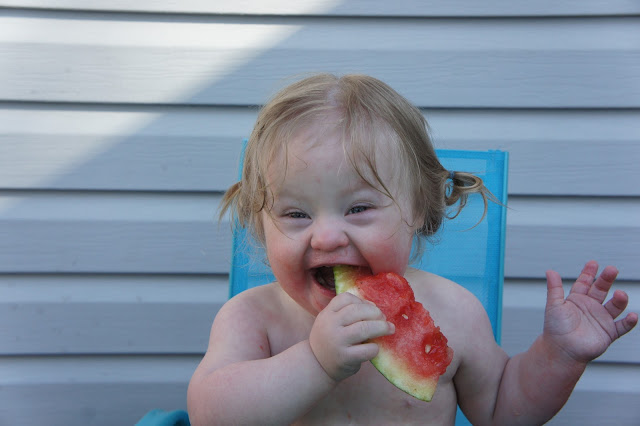 Sofia has been home over 4 months now and I feel it's time to wrap this blog up and blog solely on our family blog!  So here's one last update on our Curly Girlie! Sofia has made a lot of progress in the short time she's been home and we're so thankful we have the pleasure of being her parents. We're learning how to parent a whole new type of child. Sofia has a wild spirit that cannot and should not be tamed :) She is no mystery, we almost always know exactly how she's feeling, as she shows her emotions no matter what they may be. She is very observant of everything happening around her, loves to explore her surroundings, and learns very quickly!
Just recently we've noticed that she is finally starting to feel more comfortable here. She has been giving more snuggles, and seeking out comfort from us, which is huge. For the first few months she seemed to not understand that she needed comfort and love from us. For her first 15 months of life she learned to…